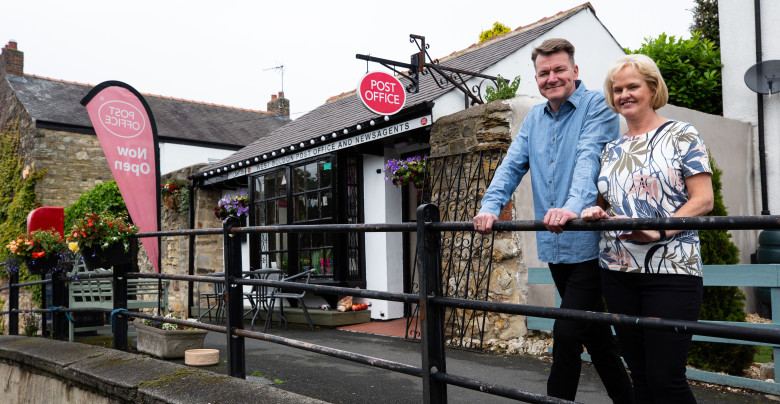 The hubbub of a Yorkshire village Post Office may lack some of the high-stakes drama of a courtroom, but for Sean and his wife that’s precisely what they wanted to replicate in South Tyneside.

“I was 56 and I’d reached a crossroads with my legal career,” recalled Sean. “I used to regularly get away with my family to the Yorkshire Dales, and we noticed people were just friendlier in the shops, chattier. And my wife and I were inspired to bring a slice of that countryside shop life back to the Boldons.”

Sean and his family took over the shop and Post Office two years ago. He reduced his partnership share in the law firm, and his wife left her job, which allowed them the time to craft their vision of an ideal village shop – complete with a Post Office.

“We have to work seven days a week,” said Sean. “But if you do something you enjoy, then it doesn’t feel like work. We get a lot of satisfaction from what we do. People say we’ve put the heart back into the community.”

Though their shop is small – “we call it the Tardis”, Sean smiled – it is important that it is a genuine resource for the local area. As such, alongside traditional convenience-store fare, they sell a range of locally baked breads and treats. And they’ve recently established an organic veg box scheme using community suppliers.

“We’ve done it without unnecessary packaging,” Sean noted. “Even the wooden crates they’re sold in are returned for use by local allotment holders.”

Sean’s legal career has proved useful, he said. “It’s given me the confidence to be able to talk to everyone, the whole diversity of our clientele. The demographics of our customers is very mixed. We take a common sense approach. We work to talk to everyone. Human contact is the big difference between us and bigger organisations.”

For a small village store, West Boldon’s Post Office has a mighty social media presence. “Our Facebook page has an average of 5,000 hits a month. It has peaked at 25,000 a month.”

“Use social media, but don’t overstretch yourself. I recommend choosing one platform to focus on and doing it well. Build it organically, rather than boosted posts. Try to keep it interesting, quirky, engaging.”

Sean’s shop partners with local attractions during the summer months, offering discounts and competitions for families. They also run giveaways and special seasonal displays. Promoted on social media and on the instore compact screens, it helps to spark a buzz with customers and gives character to the premises.

Having a Post Office instore has worked wonders as well. Sean said: “We’re providing a community service – it’s still a trusted brand, people have expectations of it. People also still look up to postmasters. You’re carrying on that brand, that image.”